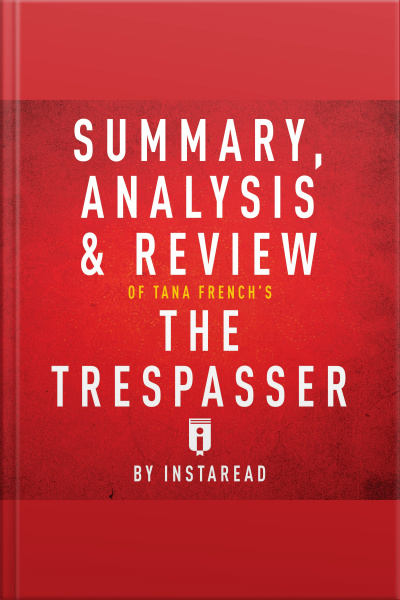 Summary, Analysis & Review of Tana French’s The Trespasser by Instaread

The Trespasser by Tana French is a mystery novel in which Detective Antoinette Conway investigates the death of a young woman who was murdered. Although the circumstances surrounding her death seem obvious at first, Conway and her partner Steve Moran soon find themselves drawn into a delicate, complex investigation that could cost them their jobs.

The story begins just as Conway and Moran are finishing a night shift at Dublin Murder Squad. As they prepare to leave, their superintendent, O’Kelly, personally hands them a case, which is unusual. He says they’ll be working with Breslin, a senior detective who will serve as their mentor even though Conway will be in charge. The partners aren’t thrilled; the case looks banal and Breslin is famously annoying.

Moran reads the file on their way to the crime scene; the police received a tip from an anonymous caller. The detectives assume the victim’s death…

PLEASE NOTE: This is a Summary, Analysis & Review of the book and NOT the original book.

Inside this Summary, Analysis & Review of Tana French’s The Trespasser by Instaread

· Summary of the Book

· Analysis of the Themes